Did my first print and everything was going great until about 12 hours into the print where some very drastic layer shift has occurred.

Every print now after and this layer shift remains constant right from the beginning. I have double checked all belt tension and tried looser or tighter, I have also watched and it really doesn’t seem like the belt is skipping at all. Maybe the pulley’s on the stepper motors are slipping however?

Z axis has been reset multiple times with perfect smooth action and no binding when lifting and lowering the bed manually, I have printed the z motor spacer and this is well aligned, the 2 bolts holding the z rod brass guide are loosened, still having this same issue. I have slowed speed to 45ms, I have tried multiple layer heights, I have tried removing jerk via Cura and exhausted settings in there.

It definitely seems as though something has happened mid print when first using my Ender 3 v2 and now I haven’t been able to find the problem ever since. I have disassembled the bed entirely and inspected, re-levelled and re-assembled. I can get the first layer to go down well but as they start stacking they are not aligning well.

Any help is greatly appreciated, stepper motor issue or maybe the pulleys off the stepper motors have come loose?

Sorry for the long message!

There are some steps we can do to figure out the problem.

1. check for any losing belts( you did it) and screws. you can move each axis with your hand gently to feel if there is any slipping or strange movement.

2. Pint a small cubic-shaped model. If the layer shifting occurs, the model will show you which direction went wrong(x,y,z) and you can narrow down the target.

@eli-liu thank you! I’ve really cranked down the belts and gone over everything again.

will print a XYZ test cube ?

Ok, moving forward.. so the XYZ test cube looks absolutely perfect to me. Then I did the larger cat file and it looks decent but started having issues near the top, as photographed there is layer shifting. So then I went back to trying to print my main vent duct file and it went right back to severe layer shifting throughout the majority of the print. I am using the exact same Cura settings as my perfect XYZ block to rule that out.

Furthermore, about 6 hours into the print the Ender 3 V2 simply stopped printing and returned extruder to home position and stopped heating bed and nozzle.. but on the display it said it was still printing but the progress was 0%. If I pressed pause on the controller nothing would change, all I could do was press stop.

This leads me to think there is an issue with the supplied microSD card during the longer prints, I printed another XYZ block after with the same card and settings and it came out perfect again.

Could the stepper motors be overheating causing the shifting? I have the printer unobstructed on a hard flat surface in a cool room (ambient 20c). 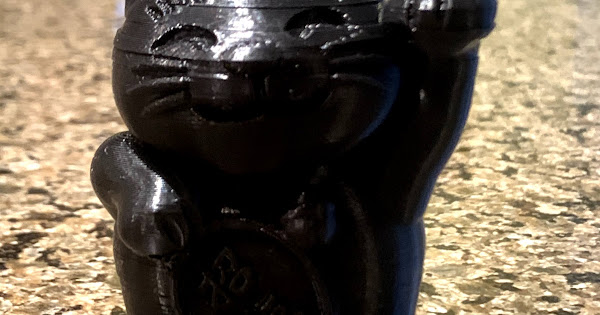 @brodygoble one more test you could do is that only reset the cubic Z to a higher value in a slicer to get more data since the cubic is small.

The printer suddenly stopped is not normal, it could be a mainboard/screen bug, you can try restart the printer and see if it can do a resume print.

Thank you Eli, I am going to do a taller XYZ cube now for you.

Just did a 300% Z XYZ cube and the result is again perfect.

I am back to trying my square to circle larger transition duct again and while all is perfect so far as I’m early on into the print I have noticed that the fan noise has really ramped up, more so than when doing the XYZ cube. I think this print is somehow generating more heat on the unit than the small test prints and this heat is creating the layer shift.

The printer is running at 50ms speed, room temp is 20c. Printer is on a large hardwood table with nothing underneath it. Is it really just overheating on its own here? Happened about 15mins into this large print where the fans kicked up to max speed. As I said, it is still printing fine with no layer shifting but likely this is going to be a reoccurring problem as my last 5 attempts at this print have all failed.

brodygoble
(@brodygoble)
Active Member
Joined: 2 years ago
Posts: 19
Topic starter 09/12/2020 11:43 pm
Hello, I have done further testing and exhausted more ideas.
I’ve changed SD cards and also still having bizarre inconsistent prints. While I can get a small print to work for about an hour to 2 on a cold machine anything after that and I start seeing random small layer shifts line after line, wandering in every axis direction. It’s more of a layer alignment issue than a shift issue if that makes sense.
Furthermore, it has happened a few times now where the print has randomly just stopped, sometimes the extruder will move off to the home position and the nozzle/bed will start cooling (almost like it thinks it is done without moving the bed forward) but nothing changes on the control screen.. and you can’t resume the print but only press pause (which does nothing) or stop which stops the whole process and you have to start over.
Last evening while using a new (different) SD card this happened to me again, but this time the extruder stopped in its’ exact spot and the nozzle and bed stayed heated (lucky because usually it stops heating the bed and the print releases from the bed). I then tried something different, I cycled the power without touching anything on the screen and was able to pick up where it left off upon restart.
All in all, I think I have a weak mainboard or stepper drivers or something along those lines on this new machine and will look to return it unless Creality is willing to send me replacement parts until it operates as it should for more than an hour at a time. I am still within the 30 day warranty even after all of this chasing of the problem.
Again, I can print something for about 1 hour and then everything starts misaligning. Let it cool off and I can get another hour. Stop a print while it’s hot, start another and the layer alignment issue starts from the very beginning.
Something has happened to the electronics during my first print and the reliability has disappeared. Something is weak with the mainboard, stepper drivers or any other electronics as they are very affected by heat.
ReplyQuote

Okay, more interesting progress on the problem. Since leaving the unit keep the bed heated at 60c to not release the printed project and have to start over.. I had let it pause for many hours and then resumed again and it is back to printing perfect. It is clear where the model was paused as there was all sorts of layer alignment issues up to this point.. then there is a bit of a glob of material where the pause took place as the nozzle and bed stayed heated. Then when it resumes hours later it is back to printing perfectly.

This confirms there is a heat related problem with the mainboard/stepper drivers. They are certainly faulty is effected by this little heat, nothing is warm to the touch on the case or general area when they start to fail.

See attached photo, it is clear where the print stopped (largest shift) and then where it was resumed hours later with no shifting as the mainboard was cooler.

@brodygoble Every time you pause the print, X Y motors do an auto home and find their origin. It will correct whatever the missed steps they had before. We may agree that the motors or the driving system might have problems, but it cannot prove that heating is the cause.

@eli-liu when we start looking at the random stopping mid print issues and freezing it only makes sense that the mainboard and stepper drivers are the cause.

what should I do? My messages to warranty are not being answered and my 30 days is running out.

@brodygoble contact the after-sale is one thing for sure you will do. For the problem, I personally haven’t had the mainboard bugs that could cause layer shifting; for motors, have you found out the shifting happens in which direction or on both X and Y. Does the motors move smoothly by hand? You can also turn on the Z hop option in the slicer to prevent nozzle collision with the printed model.

@eli-liu yes, all motors rotate by hand perfectly and when printing they do not seem to be overly hot. I can leave my hand on them for reference without burning.

The shifting equally happens between all the X Y and Z axis.

It can’t be anything to do with finding origin as well as I can pause and resume again right away and the shifting will still be there. Only way is to actually let the board cool right down and then resume. I can even finish one print and start a new print right away and right from the beginning it will be shifting. I can then turn it off, wait an hour and then start a new version of that same print and it will work as it should.

This is why I am convinced it is the mainboard overheating. Do you have an email for after sales? I have been messaging service@creality3d.cn but I have not gotten a response in 3 days regarding this.

@brodygoble I don’t have direct contacts with the sales department. You can go to the bottom and click Facebook to reach some admins there. It still depends on which seller you bought your printer from.