Hello, I'm new to the printing world. I just bought cr6se a week ago. I've printed several prints and they all turned out great. A few days ago I started a print that ended up being th ebeginning of several issues that I dont know how to fix.

Problem 1 is what I believe to be the filament run out sensor. I can't go through a single print anymore without it giving me a filament run out message multiple times. Same roll of filament since I've opened the machine up and have plenty left on the roll. I found a couple possible fixes online that I've done with no success. Those include putting a couple drops of super glue on the pegs to secure the circuit board in the housing and mounting the housing with one screw underneath the bracket with a scrap piece of filament in it.

Problem 2 is every time I load a program it no longer sets a temp for the nozzle. Again new issue with programs that worked fine beforehand.

Problem 3 is I have caught it a twice where the print has randomly stopped printing and cooled down without actually finishing the print. No message or errors I could see on the screen. Alternatively I have also had 2 or 3 separate prints that have reached 99% and stopped leaving everything up to temp, the screen is unresponsive and the print appears complete but I can't do anything without doing a power cycle.

I love the print quality and overall ease of use(prior to problems) but I'm seriously debating on returning it and going with a different printer because I don't have a tremendous amount of time to do nothing but troubleshoot and tinker. 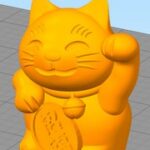 I know this problem is not uncommon and probably stems from the motherboard. You should contact Creality in order to obtain a replacement. Otherwise in the meantime you can apply the solution See Here
For point 2 it's strange! I have never seen this! Which slicer do you use? If you use the Creality slicer or Cura slicer you should look at the start of your .gcode files. You should have the following lines:

To see these lines you have to open the .gcode with Notepad for example.

Of course the temperatures S60 and S200 depends on the choice you have made in the slicer.

Another reason for this problem which can also be the reason for point 3 is that your SD card is broken. In fact, the machine cannot read the file correctly or the gcode is corrupted during writing.

@phil-free much appreciated for the detailed response. I will try the bypass and hope I can get a new motherboard under warranty. For point 2 I considered the gcode but didn't bother to check since I ran the same program before any issues started. The broken sd card is a possibility I hadn't considered and will try that. Hopefully that takes care of it.  I'm currently using curas newest version from their website as crealitys cura slicer apparently doesn't want to work on my computer at all. Download looks fine but from a little bit of research it looks like it just isn't compatible with my version of windows 10(should be the most current version available)