Hello, I'm new here and have a CR 6 SE for about 2 weeks now and I'm actually quite satisfied with it.

What can I do to get the printer working again?

Did you updated the screen firmware also ??

Did you updated the screen firmware also ??

Now I have repeated the process completely. The result is the same.When I try to install the firmeware update I see again only an empty bar, I waited 15 minutes to be sure. The screen firmeware update runs through.
After that the 3D printer doesn't start again and gets stuck in the loading screen as shown in the picture above. 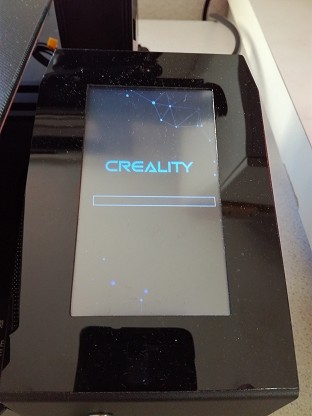 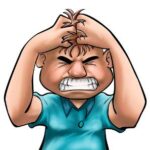 Anyone have a trick for getting the system to read from a SD card to print? Still on 1.0.3.6. Worked fine last night, two jobs finished. Took car and spliced another project to the card. Printer choice does not even see the two g-code project that were read from and printed last night.  Even turned printer off, and back on. Waited for warm up again and still does not read card.

When I take card back to the PC and check, it sees all three jobs/files on the card. Back to the printer, startup and wait for warm up.  Still will not read from card. Does not show error message. Simply does not appear to read from card.

This post was modified 5 months ago by akikiki
ReplyQuote

First I successfully made the M / B Firmware and then I try the Screen Firmware.

When I turned on the power switch, the screen lit up, but nothing happened, like a black screen, and it stayed that way as long as the power was on.

I tried to use the previous 1.0.3.6 firmware and this time it was successful, mainly to check if the card is readable by the printer.

In the previous version the filenames were legible in clear Chinese characters, but in version 2.0.1.2 the characters were like ascii.

In another post, someone mentions something about file naming and UTF-8 and Ascii filename coding.

This woke me up and made me curious about the export process!

So, my default compression program for all file types is 7zip !!!

I open the screen zip file with 7zip and then again with winzip and here we are!

7zip shows as above.

But winzip (I also tried winrar, with the same result) shows different characters, like the following.

So I extract these files correctly and copy them to the SD card.

The result was a successful firmware update !!!

I tried and used the Chinese characters, copying from the file names from version 1.0.3.6 and the result was successful!

So in the end, the lesson today was that you need to decompress these firmware files with the right decompression program by file type!

I hope this helps others with the same problem I had.

I also hope that someone from the Creality will read it and convey this information to the right person to verify and correct this issue.

Sorry for my poor English. My native language is Greek

Well, no one seems to know. So I tried it myself. Tried different Allocation Unit sizes on FAT32, and looks like I am having more trouble just getting my printer to read media. Ignores micro SD cards. and this morning, would not read STL files to show me what I can print from my SD Card. (Different card.)

@eli-liu   The language button is missing when it ends up in Chinese. Can someone tell me how to get that reflash going? I got it to work once and then it got stuck in Chinese and now I cant get it to flash again.

@renosa Awesome job! You figured out the issue that was stopping me!

Before I try a flash to 2.x again, I am going to take pictures of all the menu screen/pages so I know what they look like line by line and position in English.  So when they boot to Chinese, I can blindly pick the correct one I need.

I noticed when I booted after flashing 1.0.3.6 that it was in Chinese. I stumbled on the trick to switch to English.  Language is the third line down under Control.  Then I accidentally pressed at the far right end of the Language choice (there's nothing there to indicate), but when I pressed a blank spot, the slider button appeared and showed me Chinese and En.  I just punched En and it changed to English.

I recently purchased a CR-6 SE and had several very good prints. However, I tried printing using Vase mode using Cura as my slicer and I'm having issues. The printer will pause over and over again causing blobs every few millimeter unless I took my printing speed to below 10mm/s. I followed the instructions and was able to successfully update the firmware on the main board and LCD display to V2.1.0.2. I read on other forums this might help with this problem. But if anything it is worse now and the printer pauses and blobs form if I print at speeds above 5mm/s using Vase mode. What is causing a 32 bit motherboard to act like an overloaded 8 bit board? Any help would be appreciated.

I recently purchased a CR-6 SE and had several very good prints. However, I tried printing using Vase mode using Cura as my slicer and I'm having issues. The printer will pause over and over again causing blobs every few millimeter unless I took my printing speed to below 10mm/s. I followed the instructions and was able to successfully update the firmware on the main board and LCD display to V2.1.0.2. I read on other forums this might help with this problem. But if anything it is worse now and the printer pauses and blobs form if I print at speeds above 5mm/s using Vase mode. What is causing a 32 bit motherboard to act like an overloaded 8 bit board? Any help would be appreciated.

Yes, vase mode is broken for me, too. Very very annoying

I just updated my CR-6 to versión V2.0.1.3, i copy the file to the card, and istalled, all seems good and working, but the language is in chinese, and I can´t change the language.
I access the control menu, but the option to change language seems disable.

How can i change the language?

@eli-liu I've had the CR6-SE for a while now and while I've had some problems they had all been solved up to now. Today I updated the firmware for the mainboard and that shows now as CD-6 SE-V2.0.1.3 without problems. I then proceed to try to update the screen firmware and followed all your instructions. After the process reaches the line that says "Download   HZK Files: " it takes a long time to continue and when it does the screen display turns off completely. After a while I took the SD card out of the screen board, rebooted and the printer started but there is a problem. The screen display that used to be labeled as CONTROL, now shows up as setup and the actual control functions are not there, but the setup ones are. I've followed your troubleshooting directions and have used 3 different 8 MB SD cards and I continue to get the same results. Please help me solve this problem. Thank you in advance.

ReplyQuote
Page 4 / 5 Prev Next
Please Login or Register to reply to this topic.
All forum topics
Previous Topic
Next Topic
Topic Tags: